SVG AND TAIWAN DEEPENING TIES WITH SIGNING OF TREATIES

ST VINCENT AND THE GRENADINES SHINE IN WASTE TO ART CONTEST

Environmental Protection in the Caribbean (EPIC) and Science Initiative for Environmental Conservation and Education (SCIENCE) have announced the winners of their Waste to Art competition held under the theme “Amazing Seabirds: Our Birds, Our Islands, Our Future.”

The contest was held on islands throughout St Vincent and the Grenadines and Grenada within four categories: Primary Schools, Secondary Schools, Tertiary Schools and Adults.

First place in the Primary Schools category was awarded to Kyle Salhab and Zariel Thomas of Grenada, who used Styrofoam, wire, and newspaper to depict a seashore environment.

Second place went to Allen Lowmans of St Vincent and the Grenadines, who displayed a Red-billed Tropicbird.

In the Tertiary Schools category, Darell Lewis from Grenada received first prize for a portrayal of the endangered Black-capped Petrel followed by Hannah Francis and Nazara Cobb from Grenada who received second prize for their submission showing a Magnificent Frigatebird flying over a fishing boat.

The Adult category for persons 18 years and older was won by the duo Rowena King-Dasouza and Sheldon Dasouza of St Vincent and the Grenadines for the piece entitled “Life Cycle of the Magnificent Frigate Seabird”.

Second place in this category was copped by Glenroy Gaymes of St Vincent and the Grenadines who portrayed the island of Battowia, which is a globally recognised important bird area for seabirds. 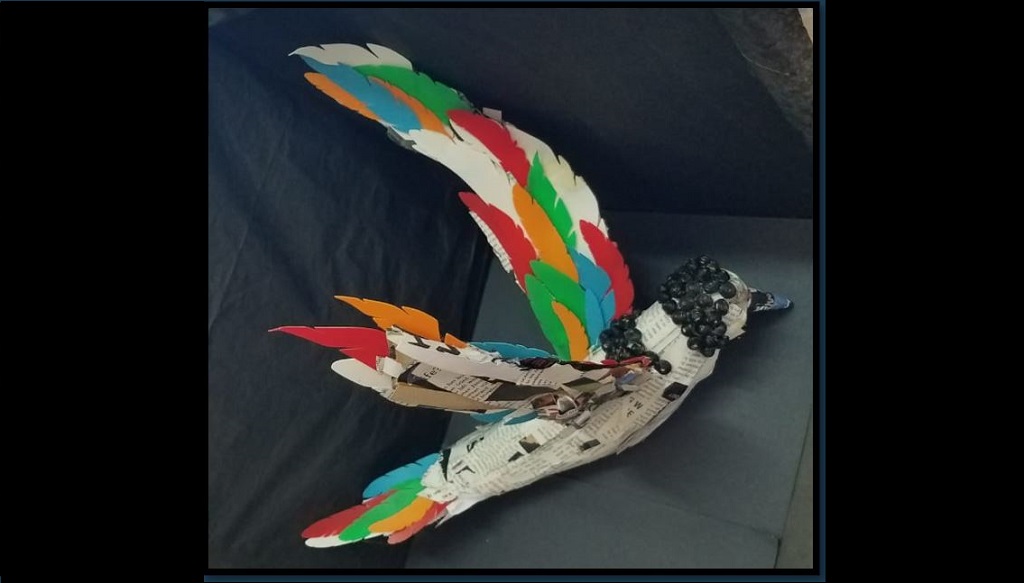 This contest was an opportunity for students and the general public to bring attention to the threat of marine litter to wildlife and showcase their creativity and knowledge about seabirds; at the same time, they contributed to a cleaner and healthier environment by removing plastics and other waste material from beaches and seabird habitats.

Marine litter is a global threat to wildlife that is now found in even the most remote regions on the planet. In 2020, EPIC, SCIENCE, Ocean Spirits and other local partners conducted five clean-ups at offshore Grenadine islands, removing numerous bags of waste from seabird and sea turtle nesting habitats.

Items collected consisted primarily of disposable household waste, such as Styrofoam containers, plastic cutlery and plastic bottles, while flipflops and fishing gear were also common. The organisation reminds everyone to be mindful of their waste disposal and to participate in clean-up initiatives where possible.

The competition was made possible with funding from the US Fish and Wildlife Service (USFWS), United States Agency for International Development (USAID), Cape Cod Bird Club, and donors to Environmental Protection in the Caribbean (EPIC).

CLICO SETTLEMENTS IN THE MAKING

NEW CONSUL GENERAL PLANS TO BRING THE CONSULATE TO THE PEOPLE

SVG HEALTH SYSTEMS CAN ADEQUATELY TEST FOR THE MONKEYPOX VIRUS

SVG AND TAIWAN DEEPENING TIES WITH SIGNING OF TREATIES